Mirrors on a motor vehicle allow the driver to observe what is happening in the vicinity of the vehicle, but are they enough? Understanding blind spots can help reduce road collisions, reducing blind spot dangers to vulnerable road users (VRUs) including motorcyclists, cyclists, and pedestrians.

What do Blind Spots mean for a driver? 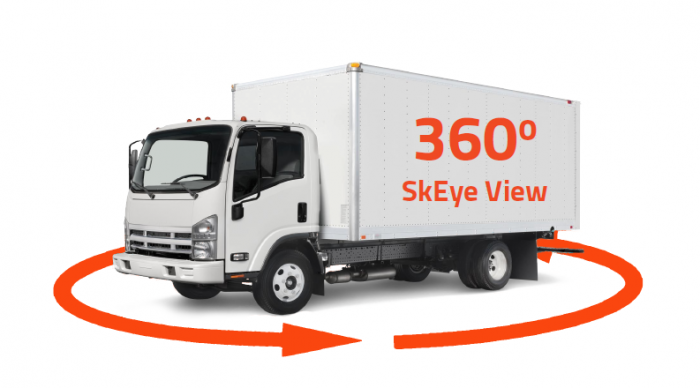 The number of cars and commercial vehicles on our roads have increased exponentially, but our roads and parking spaces have not. All motor vehicles inherently have what are known as blind spots, which is why they are fitted with rear-view and side mirrors; but they do not adequately cover all eventualities. Objects seen in mirrors can often be closer than they appear especially if the glass is convex, as is usual on the front passenger side of the vehicle. Mirrors do not offer 360º coverage; thus, other vehicles at some point possibly during an overtaking manoeuvre will be out of a driver’s vision.

Blind spots are present all around the vehicle. Even the most attentive driver could miss, say, a small child directly behind the rear bumper. . It isn’t just pedestrians crossing behind the car either. Other vehicles approaching or stationary objects can all be an accident waiting to happen as any person who has reversed into one of those small concrete bollards can tell you.

Many modern cars these days have reversing devices or cameras to alert the drivers of potential hazards at the rear of the vehicle but imagine how much more difficult it is for a truck driver to commit to similar manoeuvres.

All drivers in following cars have seen a notice appended to the back of trucks with the message, “If you can’t see my mirrors then I can’t see you”. In larger vehicles, like HGVs, blind spots are more of an issue than with cars because of the size and shape of HGVs in comparison to smaller and more streamlined vehicles. It is worth bearing in mind that, with vans, lorries or other large transport vehicles blind spots can equally apply to the front of the vehicle due to the size and shape of the bodywork of the vehicle. 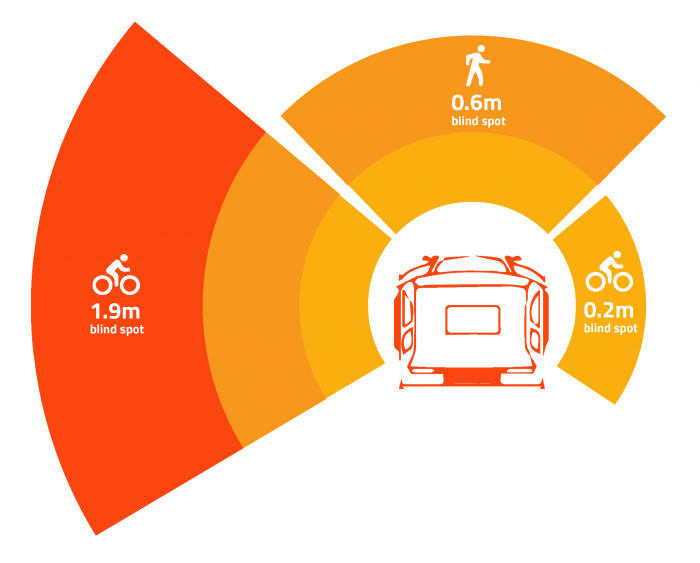 The largest blind spot on a truck is behind the vehicle and slightly to the passenger side. Additional blind spots include right below the passenger door, anything below six feet tall in front of the truck for about nine metres, and finally, directly behind the truck.

Not surprisingly, pedestrians, motorcyclists and pedal cyclists are considered vulnerable road users making up 26%, 20% and 6% respectively of all road casualties, according to a latest report by the Department of Transport.

This is not to say that progress hasn’t been made. In fact, the number of HGVs involved in fatal collisions across the UK has halved in the last decade. Progress has also been seen in London, with the number of cyclist fatalities involving HGVs decreasing by almost 30% in the last 5 years alone (Source: FTA).

However, there is still a long way to go towards Vision Zero.

More than 80% of overall serious accidents happen at, or within 20 metres of a junction as a result of a driver manoeuvre,  driver not being able to see what’s around them clearly due to vehicle blind spot or road layout, and driver not looking properly (Source: Department of Transport).

When drilling down to blind spots as a contributory factor, researchers found that, in a year’s worth of HGV accidents, while only 5% of those accidents occurred in the front blind spot, the accidents nevertheless accounted for a staggering 30% of the fatalities. Accidents in the rear blind spot accounted for twenty-five per cent of fatalities, followed by those in the near-side blind spot specifically when vehicles are turning – this is where cyclists are most at risk.

Thanks to huge advancements in vehicle safety technology, nowadays, drivers and fleet operatives have a multitude of options at their disposal to ensure safety and optimum operational efficiency.

On-board CCTV helps eliminate blind spots and make the manoeuvring of vans and trucks safer. Cameras can be mounted externally on the rear, sides and even on the roof, protected from both the weather and casual vandalism and come in a variety of types to suit individual requirements. In addition to security and insurance matters, CCTV can provide all-around blind spot coverage, alerting the driver in-cab. It has already been shown that such systems have reduced road traffic accidents of all types by forty per cent.

The increase in the availability of advanced driver assistance systems (ADAS), then, either supplied with a new vehicle or as an after-market purchase is a further step to providing added visibility and awareness of other VRUs via an in-vehicle monitor and driver feedback device. ADAS relies on inputs from multiple sources, including automotive imaging, LiDAR and radar. Included are, variously, automatic emergency braking, traffic warnings, close vehicle alerts, and lane departure warning amongst others and, in some cases, blind spot alerts.

Under the Direct Vision Standard (DVS), HGVs larger than 12 tonnes will be categorised depending on the level of a driver’s direct vision from a cab – and will be given a rating between ‘zero-star’ (lowest) and ‘five-star’ (highest).

Only vehicles rated ‘one-star’ and above will be able to operate in London from 2021 to reduce the risks HGVs present to VRUs. From 2024, the minimum requirement will be raised to ‘three-star’.

Blind spot elimination and minimisation through connected vehicle camera systems, mirrors, sensors, audible warnings, and monitoring systems are some of the features needed to meet the requirements under the Direct Vision Standard 2020.

The old driving instructor adage of ‘Mirror. Signal. Manoeuvre.’ is as valid for drivers today as it ever was. If, however, we are to save more lives on our roads, perhaps it is time to add a fourth commandment: Camera.

Proud to be working with